Taking Action in the Salton Sea

With AGU coming up, I was invited to give a little talk at the Untold Stories of Science Policy session on Wednesday Dec. 11, 11:33-11:40 AM. It's a mix of the personal and professional. Here's what I plan to say: 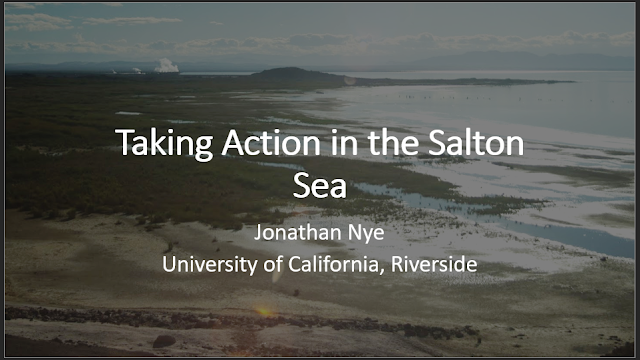 I grew up in coastal California, which really isn’t that bad, air and water quality is decent for a major metropolitan area, despite the occasional sewage spill here and there you could surf and spend time in the water, head up to the mountains or desert a short drive away, no big deal. I’d go to national forests and parks, places that are protected wilderness. My dad would take me out to abandoned places, like old ghost towns. For me this was like an imaginary escape, taking me back in time. It wouldn’t be until much later that I realized many of these towns suffered from serious environmental problems, like acid mine drainage, damaged ecosystems, and public health issues. Ignorance is bliss, right?
In high school I remember reading articles about places that were environmental disasters, piqued my interest. Places like Centralia, PA or Chernobyl. One of these was the Salton Sea. I pictured it as place of urban decay, environmental degradation, and paradoxically, beauty, much like these other abandoned landscapes. I’d seen some of the famous photography done out there that painted the Salton Sea as a fallen postmodernist paradise. Little did I know about what was lying beneath that thin veneer of romanticism.
As I progressed in my education, I became more aware and knowledgeable of the both regional and global environmental problems. Of course, climate change, which, like many people in the audience I’m sure, I was frustrated that elected officials didn’t take (and still don’t) take seriously. The more local issues, like drought and air pollution, that affected California. I didn’t incorporate these into my research. I’m not the political type, I don’t want to endlessly argue in online forums, like Facebook, and just refused to directly engage in that nasty discourse. Then Trump happened, and I changed my tune.
My PhD dissertation was about human activities on ecosystems, but not directly applied to something like a policy outcome. Near the end of my time as a graduate student I decided I should really do a better job of reaching out to a public audience.  I saw in my email inbox a new “Science 2 Policy” certificate course at UCR, that promised to help with science communication and reaching policymakers. I learned later that this is a first of its kind program to directly engage grad students with the government, of which the instructors have pointed all kinds of student led efforts to the right people in the legislative and executive branches at the state and national levels. Mostly boiling your science down to KISS (Keep It Simple, Stupid) and cut out all that jargon to get at what’s really important. 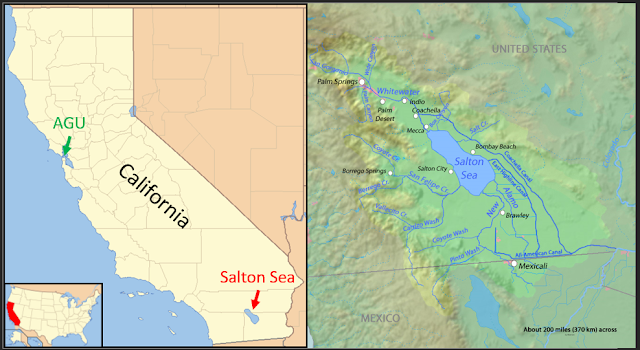 I didn’t see an easy application of my PhD work, so I opted for a side project that my Advisor Marilyn Fogel had taken up: the Salton Sea. It was through this that I learned about some issues I hadn’t been aware of: the lost fight over water rights resulting in an increase to the exposed shoreline sediments causing a massive public health crisis due to air pollution, affecting fish and wildlife on top of significant pollution from agricultural and sewage runoff. The deeply impoverished region of southeastern CA, the poorest in the wealthiest state in the union, with a large population of undocumented people that work the fields of the Imperial Valley (worth over $2 billion). One of my professors in anthropology described parts of America as “the 3rd world in the 1st world”. The Salton Sea is one of them. And importantly, I learned of the public’s distrust of state’s promises to fix the crisis, which remain unfulfilled. With my advisor Marilyn, the S2P instructors Susan Hackwood and Doug Brown, and the S2P president William Ota on board this led to a few efforts at UCR.

First – the Hackathon and the collaboration between the EDGE Institute and the S2P program at UCR– This is an effort to group grad students in a room over two days to address policy questions. On the Salton Sea, we were asked by the SSA about the feasibility of a biogas facility for energy and revenue generation. Short story, probably not worth the effort. We also found major issues with the state’s 10 year SSMP, which is already 4 years behind schedule in terms of implementation. We plan to embed a student in the SSA’s office to offer science-based inputs. We’re also developing the document further into a pamphlet to distribute to policymakers and their staff, while forming a collaboration with other scientists around the campus to write a policy memo on the scientific status of the Salton Sea.


Second – The Mock Hearing – Very few people in science (especially students), as it turns out, have little indication about what goes on before assembly members and senators actually send a proposed law to a vote. Working with the theater dept. on campus, we filmed a scripted mock hearing adapted from transcripts to show the formal (and sometimes informal) aspects when hearing concerns of the public, lobbyists and lawmakers, from the wrangling and grandstanding that goes on. Laws aren’t decided in peer review as we know it.


Lastly – Community Engagement –While assessing the environmental and problems that are present in the Salton Sea, we need to keep in mind that those who are ultimately most affected by these issues are those that live and work by the sea 24/7 – A relatively poor and underrepresented population including migrants and Native American groups. Many of the people who live here speak little English and suffer with environmentally derived illness at much higher rates than the general population. Working with Ann Cheney at the UCR School of Medicine we are sharing our research with community members to hear concerns and guide our research. It’s with the families living by the Salton Sea that gives an extra sense of urgency to prod the state into seeking solutions to the environmental issues in the sea.
Ultimately science-based policy in the Salton Sea needs to be part of the solution, working alongside with local businesses and the agricultural industry to promote public health, a clean environment and a vibrant economy. By educating scientists on the law-making process, students and researchers will be better able to communicate with policymakers. In 2020 we plan to publish a finalized science-based policy memo to send to policymakers in Sacramento. The S2P certificate program (which I participated in as a student) is planned to take on new students in Spring 2020, while the mock hearing will be turned into an annual event. By embedding a student in the SSA we’ll have a way to work with directly implementing science guided approaches to Salton Sea projects. Finally, by gaining input from the community we can guide are own research in helping the people living nearby. From the level of students to senior professors, we scientists can participate in shaping environmental policy rather than be bystanders waving from the sidelines.
Posted by Jon Nye at 2:41 PM No comments: